skip to main | skip to sidebar

The Last Blast of the Holidays

Christmas is coming and so is The End of the World. So Momo is checking in with a few last-minute messages for both impending events.

Doomsday Deals With the Apocalypse so close at hand, why pay sales tax? On Friday, December 21, we’ll pick up the tax on all women’s clothing, a selection of men’s wear, and other treats, even if they’re on sale. We’re open until 7:00 or until the world ends.

Naughty + Nice Still searching for the perfect gift? Seems like everyone is waiting until the Nth hour this year. Be not discouraged, Momo is here for you with many perfect presents. And remember, we’re always happy to wrap in our inimitable way. Here are just a few of our favorite Naughty yet Nice inspirations:

Cashmere Me
Indulge someone in a cashmere cuddle. Fingerless gloves in luscious colors from New York’s Meg Cohen are among our picks, a great value at $62 considering she sells them online for $75. One size really does fit all, including men and women. In our plush pile of cashmere, you’ll also find ‘fits all’ wraps and ponchos, nicely priced from $120 - $150. And for the eco-chic, we have local girl Jen Gay’s repurposed cashmere/wool hand warmers, cute as a button for $28.

Adopt a Dopp Kit
Sturdy and handsome, like we like our men, this one from Au Bags of Maine is just that. Made of cotton canvas trimmed in leather, at $55 it’s an ideal gift for dad, husband, boyfriend ... Fill it with Billy Jealousy travel products ($25) and get the whole deal for $75. Guaranteed that you will be remembered on many trips to come.

Beautiful Bag-gage
Momo is becoming the place for stand-out bags, gathered from as close as Boulevard Park and as far away as Kobe. Each of our accessories is designed and created by real human hands ... Chemical Wedding using leather, metal and wood, Maruka in vintage Japanese kimono and obi dotted with precious stones, and XO Bruno using rugged canvas and leather. Prices range from $115 - $325 each is truly a fashionable, functional treasure.

Hip Flasks
These flippant flasks from Izola hold enough to warm up the winter and fit in nearly any pocket. With sayings like “May you never go to hell but always be on your way,” it’s the ultimate brother-in-law gift. In 3 and 5 ounces, $26 - $29.

And There’s More at Momo ...
... including our exclusive Naughty and Nice buttons, only $2 each. Tom designed them and Lala wrote the copy, just for you. How nice is that?

Painless Parking With your minimum purchase of $50, we’ll give you a two-hour parking voucher valid in these neighboring lots:

After 6:00 p.m. at Bank of America lot
Behind the bank at 6th Avenue South and South Jackson Street

Park first, come in and shop, then pay your parking when you leave.
Holiday Momo hours are Monday – Wednesday, 11-6
Thursday – Saturday, 11-7
Sunday, 12-6

Many Mahalos to each of you, our lovely, loyal customers, we truly appreciate all of your support. Happy holidays and a peaceful season to you and your family.

After 14 years of designing for big names such as Eddie Bauer, Cutter and Buck and Tommy Bahama, Seattle fashion designer Susan Fedore took the big leap to create her own fashion line, Una. She started in 2007 and has been surviving ever since, cutting and sewing away on a 24/7 workweek in a small room in her Ballard home, which she lovingly calls “the dungeon.”

Fedore enjoyed making crafts since she was in high school, however, working in the fashion industry was something she fell into. “It wasn’t that I picked it so much that it picked me,” she said.

Coming up with the idea to design clothes was easy. Finding customers to buy her creations was a whole different ball game she hadn’t prepared for. “First, I started doing craft shows,” she said. She then managed to get her Website posted online. But she knew that wasn’t going to be enough. “I realized this wasn’t going to be easy unless I got into wholesale,” she said.

Fedore managed to find a good home for her clothes at three boutiques, and has expanded into online sales and selling smaller accessories at other venues — such as a holiday favorite: comfy cotton arm warmers at Momo.

Elements of nature inspire Una’s hand silk-screened arm warmer designs. One pair features a spread of fern in order to emulate going on a walk in the outdoors and looking at the ferns growing from the ground. Another pair features a pattern of pine needles, specifically knob cone pine trees, which remind her of trips taken along the Pacific Coast. One of her most painstakingly intricate arm warmer designs features a birds’ eye view of a moth spreading its wings.

Her design comes from other sources too. For instance, her scissor-patterned arm warmers?

“[I did that] as a tongue-in-cheek reference to Edward Scissorhands,” she said with a laugh. In spite of her lightheartedness, she admits being a solo fashion designer can be tough. “I’ve never worked so hard for so little,” she said. In her first two years of starting Una, she experienced days where she felt she couldn’t do it anymore.

But Fedore isn’t letting the exhaustion get to her. “It’s not just a monetary thing,” she said. “It’s just an honest pursuit of what I love.”

If you’re interested in getting a pair of Susan Fedore’s arm warmers this winter, stop by Momo or check out Susan’s Website.

Celebrate the Season in Japantown, Kampai! 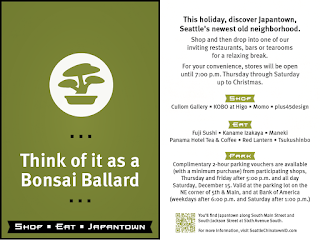 Momo is the little shop on the corner of Sixth Avenue South and South Jackson Street, the crossroads of Seattle’s Japantown. The historic neighborhood, decimated after the 1942 Executive Order 9066 which forced the removal of all Japanese Americans from the West Coast, is seeing a quiet renewal. Present-day treasures include unique boutiques, galleries, a barbershop and salons, fame-ish sushi restaurants, a landmark tea house and a beautiful secret garden. Come discover the revival!